Another end to a pleasant month. Well, almost.

And like every time I have discovered another surprising thing at the end of the month. I had no idea that people whom I don’t even know would read my blog. Seriously, I have no idea of the exact number of people who check my blog regularly. Sincerely, I dint even know people would actually read this blog which many criticize.

I hope you like the way I write and if you don’t then as if I care. The world does not revolve around you, you know (no people mentioned so you can keep on guessing!!)

Despite all the confusion in Bips didi’s life (read: my dad’s very good friend who has recently been blessed with a baby boy named Vansh) she is shifting to tomorrow. I would take this opportunity to thank her for the awesome moments we all spent together and had one heck of a time. We hope that you have a nice time there and wish you all the luck in settling in.

P.S. - Since I can't keep on leaving comments in dad’s blog I’ll do it in mine and request him to kindly update it. Its beggining to look old now, daddy!

Well this is the first time that I’ve ever been happy to go to school on the first day. MY DAY WAS AWESOME!! I mean it, it really was soo cool. Catching up with friends, getting to know what he (reference to anyone who comes in our gossip chats) said to her and vice versa, bitching about the teachers and just having plain masti. I tell you, life without school would be so monotonous. The one startling fact I’ve discovered is this: how much I’m dependant on my school. And, btw, school rocks!

For those people who HATE school (as I used to in the bad old days) here are some tips:

Remember, being nice is not that hard. If you follow the above “tips” (geez! I’m no expert) you should have friends blossoming at your feet each minute. (Exaggerating as usual). Hope you like this and guys, more comments please on this one especially from the VII-E gals.

So, instead of chanting my old motto: SCHOOL SUCKS

P.S. - Yeah, yeah, I know it’s a bit cheesy but if it translates the musings of my brain I have no problem.

While it’s going to be cool and all to see friends, still school is SCHOOL. Which spells only one (or maybe 2?) thing(s) for me: NIGHTMARE(S). Seriously, you get into all sorts of fights and if you forget a book you dread (and sweat) as to what is going to happen. You get reprimanded for not doing your homework and sometimes even VICE – VERSA. You have to stand out in the dreadful corridors where occasionally passing by your friends grin, the cleaners, if annoyed, threaten to throw the bin, your enemies make fun but the sight of your headmistress (which is most terrifying of all) makes you run.( while its not all that rhyming it certainly brings out what I had in mind)

If it has its drawbacks it also has its plusses.

School is where you catch the entire buzz, where you enjoy and where you play.

So, yeah, school is kinda fun. Even if we have (ahem I will say this for the first and last time in my life) to study.

P.S.- I couldnt resist the urge to write a second blog about boring, good, old school.

Have you heard about the Harry Potter Contest that was going on? Well, I submitted my entry. This is what its like:

They delight in aggravating him; they glare at him with complete revulsion

A surreptitious secret is covered with cloaks of deception

Even more significant than what Mrs. No 7 is wearing

They desperately shield it fearing

The scandalous whispers that would be on the round

If the inside-scoop on Harry was found

Then, viola! Harry’s life takes a rapid change for the better

Leaving the Dursleys, gnashing their teeth, trying to pull themselves together

He discovers that he is a wizard

He uncovers the true meaning of impudence

This makes him a proper Hogwarts student

It is every author’s dream

This is a must read for every individual

Aint it grand? Well, ok, I admit that this is NOT my best. I know for a fact that I do have the potential. But still, I thought I'd try. Please tell me how it is. All my completely lazy friends have got no blogs so an email from all of you would be nice...
thnx
Buhbye, you lazy bufoons.
P.S.- For the mentally challenged, I think what I wrote write now is just a little joke but if you guys dont feel that way then I'm sorry. 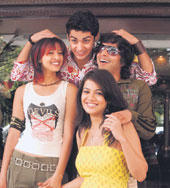 Hmm…if you’re wondering what the title suggests then I’d only have to comment that on the Jungian tree of being cool you’re way down at the roots. Hello??

This popular show is raising the TRP’s day by day.

In a nutshell, it’s basically the life of teenagers who come to study to the most elite , that is, Maurya High.

There are four main characters to this story:

Tia Ahuja- she has the wrong impression that the world revolves around her and her “angels” (read: two stupid girls who try to mimic her in every way). The most important things in her life are clothes, makeup and her papa. With the arrival of the next characters (see down) Tia becomes less childish and slowly realizes how it is to understand her needs, whims and fancies.

Ranveer Sisodia- the typical Rajput guy, he has only one purpose in mind: seeking revenge from Tia’s father, Sumit Ahuja, whom he believes is the cause to his father’s suicide. Highly matured for his age, he figures in giving everyone a second chance.

His determination to take revenge is put to a test when he inevitably falls in love with Tia.

Yuvraj Dev- the brat of the millennium, he is probably the most self centered guy in the entire school. His father, a controlling politician, never lets of a chance to put him down. Slowly but surely, Yuvi begins to hate him. His only escape from his wretched life is music which he loves eats and breathes.

Anvesha Banerjee Ray- When we talk of Anvesha we talk of downright skeptical attitude, inspiringly funny words (Hey Bhaggu! As in Hey Bhagwan and Duhuh!) And coolness. Seriously, she has brought back the meaning of cool. Daughter of a stunning actress; she suffers a terrible complex from her star mom and never takes a chance to put her down. Anvesha delights in appalling people with her outrageous behavior and loves to be branded as the “bad girl of Maurya high”. She definitely though has got her heart in the right place and ultimately is the one to tame the brat Yuvi.

Certain circumstances in life force them to create a famous band called “remix”. Enemies from day one, they would’ve have liked nothing to do with each other but later on they become conscious of the importance of each member and treat them almost like themselves

This show focuses on the teenage pangs inflicted on children and how, as a teenager, the child is most difficult to control.
P.S.- I just couldnt help writing about them...they're soo awesome!

"LOVE ONE, LOVE ALL"

WHAT I HAVE LEARNT IN THE PAST WEEK:

“LOVE ONE, LOVE ALL”

He stood there frustrated

His heart wrenching from the pain

She left him alone

He wondered if he would ever be sane

The hurt penetrated his body

And left him numb

He finally realized what he had done

Losing all control he ripped himself apart

With unusual calmness he looked about

His time was running out

Wouldn’t he be given that one chance to prove himself right?

Wouldn’t he be given that re-assuring glance to ascertain he would be her knight?

He looked bitter with self disgust

Dying a painful death was a must

He thought back to the things she said

Which filled him with an everlasting dread

If she could see him now

But nevertheless brush her hair

He wouldn’t blame her for the sarcasm

For all the unkind things she would do

He deserved it more than she knew

There’s no comfort in the truth

But there’s a difference

The latter are easier to hide

And now as he lies a broken shell

He thought back to her motto:

“Love one, love all”

Believing this was his greatest downfall

Ok, so wasn’t that a dumb poem? Well, I guess it wasn’t that deep as I wrote it in the night. You see, I am having temporary insomnia so crouching in the bathroom with the not so piercing light and writing in my note pad really has become my cup of tea. Strange, you would muse. An Aquarian as I am fond of sayingis unpredictable. Thought I’d put this anyway just to get all the mails saying how childish it was.

Hey! That doesn’t mean I’m really childish. No way. Well yea there are sometimes when I insist on getting my way. But, that’s normal.

Anyways I’m in quite a good mood today so I’d better not spoil yours by droning on and on about myself. So, lets get down to basics: which is it was my mom’s bday. Like on the 18th. I know, I know this is a way too long update but what to do? These stupid schoolwallas (read: school staff) have mounted us with heaps of homework.

Anyways getting back to the topic she’s looking as gorgeous as she did on the 17th. What I mean is that she might have aged one more year but she still looks the same

Analyzing the age factor I would say that if you have positive thinking then your heart stays positive. So when you feel older then naturally the glow from the face goes. Therefore, the biggest remedy to stay young (and I’m not talking about putting Fair and Lovely) is: think young and positive.

Lets take my mom for example: I personally wouldn’t tell my moms age (hey! I don’t want to be bombarded with pillows) but I can exclusively reveal that she is the new Jacqueline Onassis on the block.

Katie and Tom: IS IT TRUE?

9 June- The speculation on Katie Holmes and Tom Cruise’s alleged romance is a huge topic. People are skeptical about it. Further proof of this is the magazines and blogs that have mocked the coupling as a publicity stunt for their upcoming films.

Katie and Tom deny the rumors insisting that they are truly in love. Holmes says: I am so happy. I feel I am the luckiest woman in the world. Write what you want to write. (For me) it’s just such a privilege to love him.” Friends comment on the pair saying that they’re happy for both of them but seem taken aback by the intensity of the pair.

It remains to be seen if this really is a fairytale romance or a publicity stunt for the promotion of their new movie.

Personally I feel they are in love. But then again both are outstanding actors. I could be fooled there.

Hah! You're sure you REALLY wanna know? If no, then wise decision. If yes, then you're so in for it. I do have that "slight" problem of droning on and on about myself ad nauseam