A young man from a wealthy family was about to graduate from high school. It was the custom in that affluent neighborhood for the parents to give the graduate an automobile. Bill and his father had spent months looking at cars, and the week before graduation they found the perfect car. Bill was certain that the car would be his on graduation night.
Imagine his disappointment when, on the eve of his graduation, Bill’s father handed him a gift-wrapped Bible! Bill was so angry, he threw the Bible down and stormed out of the house. He and his father never saw each other again. It was the news of his father’s death that brought Bill home again.
As he sat one night, going through his father’s possessions that he was going to inherit, he came across the Bible his father had given him. He brushed away the dust and opened it to find a cashier’s check, dated the day of his graduation, in the exact amount of the car they had chosen.

Returning back and other things...

Woohoo! Me is back and with a bang! Hehe… ok well not so much with a bang more like back from a state of being temporarily insane. Seriously, I would like to be introduced to the person who thought of the concept of exams. The first thing I would do is give them a big zero!
Geez… those exams were something else. How I dread them! But I guess the red marks on the report cards AFTER the exams are the ones to watch out for. Yeah, your life can be changed from “peacefully serene” to “living hell”. And that’s not where it stops! The constant pressure of getting good marks to please parents is mind bogging. Thank God I don’t have that. My pressure seems to be the one which I inflict on myself. Sheesh. I wont ever learn, will I?

Britney “OMG” Spears has given birth to Sean Preston Spears Federline. Eew! First of all, what a name! I mean, couldn’t she have thought of something, umm I don’t know, UNIQUE? Something like Julia Robert .Oh well that’d be going too far.

Check this out. A guaranteed laugh even though this would be considered old news. But what the heck, I want this to be a part of my blog.
It’s actually pronounced as Fooking. Whatever. THIS IS HILARIOUS!

On a more serious note, this is pretty sad. I don’t know if this is true or not, but if it is then… well then.. I have a lot to say on this subject... but will leave that to another day when am in mood of ranting. 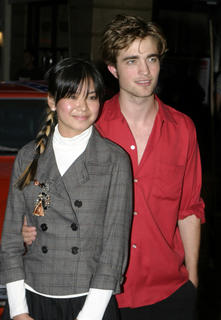 Katie Leung and Robert Pattinson will rock the nation with their sensational pairing in Harry Potter!! At least that is what everyone seems to be saying.So that’s that folks. Will update more. Till then sayonara!

Hah! You're sure you REALLY wanna know? If no, then wise decision. If yes, then you're so in for it. I do have that "slight" problem of droning on and on about myself ad nauseam